(Do executors have any obligation to claim any TNRB if it varies the size of beneficial interests in an estate?)

A duty of a personal representative (PR) is to maximise the value of the estate. However, a PR has no duty to maximise the benefit of one beneficiary against another – in fact, to be partial in this manner could well leave the PR open to a claim for breach of trust and compensation/damages by the “disadvantaged” beneficiary.

When considering the distribution of an estate, the PR also needs to apply the law consistently, being careful to avoid re-interpreting a clause to support a position contrary to that they adopt elsewhere.

“That all sounds very good”, you might say, “but what has it to do with the inheritance tax (IHT) transferable nil rate band (TNRB)?”

Let’s start by looking at the basics of the TNRB, before answering that question.

Where an estate is comfortably within the deceased’s NRB, there may be little incentive to claim any TNRB to which the estate might be entitled. The minimal cost involved would not necessarily be justifiable. However, mindful of the surprisingly large value of unclaimed assets that exist, there is the (possibly remote) possibility of further assets coming to light at a later date which could give rise to an IHT liability. By then details of the first deceased may have been lost in the mists of time, making it more difficult to reduce or avoid the potential IHT burden by claiming the TNRB. It could therefore be considered a useful investment to secure the TNRB for the survivor’s estate, effectively to insure against such a possibility.

Another situation where consideration should be given to claiming any TNRB to which an estate is entitled is where the survivor has (re)married or entered into a new civil partnership. As the TNRB is applied before the deceased’s “own” NRB, by claiming the TNRB to which their estate is entitled this may preserve the deceased’s “own” NRB for the benefit of the estate of their surviving spouse/civil partner. If the value of gifts to non-IHT exempt beneficiaries exceeds the available TNRB, then this will reduce the amount of the deceased’s NRB available to the estate of their surviving spouse/civil partner.

However, if the survivor is already entitled to claim a full TNRB arising from another relationship, there may be no benefit in claiming any to which the deceased’s estate might be entitled.

The more contentious aspect of the TNRB is its application where the will contains an NRB gift, whether into trust or absolute.

In RSPCA v. Sharp [2010] EWCA Civ. 1474, the Appeal Court decided in favour of the IHT exempt residuary beneficiary – a charity, reversing the original decision. In Woodland Trust v. Loring [2014] EWCA Civ. 1314 (Woodland), the court upheld the first instance decision confirming that the NRB gift was enhanced by reference to the TNRB, to the detriment of the IHT-exempt residuary beneficiary – again a charity.

In Woodland, Lewison LJ observed (para 39) that “the correct interpretation of (the NRB gift) should not depend on the identity of the residuary beneficiary”. In both above cases, the non-IHT exempt beneficiary was a charity, but even had it been a spouse or civil partner he postulates that the decision would be the same, although acknowledges that this was not an argument advanced before the judge at first instance. [N.B. Lewison LJ also referred to the Supreme Court judgment in Marley v. Rawlings [2014] UKSC 2 in support of his application of the facts.

It might further be noted that whilst the judge at first instance in Woodland indicated that the executors might have had discretion as to whether or not to claim the TNRB, and thus enhance the NRB gift, the Court of Appeal effectively dismissed the existence of any such discretion (para 39).

In view of this, I suggest that where an NRB legacy, properly construed, includes the value of any available TNRB, the executors have an obligation to claim the TNRB, which will be reflected in the amount payable under the NRB legacy, regardless of the identity of the residuary beneficiary(s) who may lose out as a result thereof. This may also give rise to a potential claim under the Inheritance (Provision for Family and Dependents) Act 1975 by a surviving spouse or civil partner where the deceased had entered into a new relationship.

Of course the uncertainty can be avoided by the testator specifying that any NRB gift is limited to a certain amount, perhaps defined by reference to a fixed sum or to the upper limit of the nil rate band as set out in Schedule 1, IHTA 1984.

Mindful that the TNRB was introduced back in 2007, most testators should have had plenty of opportunities to consider the effect of it upon any NRB gift in their wills. Their Lordships, in Woodland, had no sympathy for the argument that the will under consideration, made in 2001, should have been construed so as to ignore the TNRB. Whilst the Supreme Court’s judgment in Marley v. Rawlings is referred to in that case, it was considered not to have any significant impact upon the outcome.

When drafting wills, professional will-writers will routinely advise the testator to keep the terms of the will under regular review, often suggesting they look at it every 5 years, or so. Having said that, many will-writers probably recognise that such advice is not always followed, and so seek to create a will covering all eventual possibilities (or at least those that could reasonably be anticipated at the time). Unfortunately, testators may take false confidence from such “wills for life”, thinking that nothing needs to be changed and so fail to get around to reviewing the will, even when circumstances do change.

Perhaps will-writers need to be more specific in identifying that it is not just changes in family circumstances that might derail the effect of a well-drawn will, but also future changes in the law.

On the basis of the decision in Woodland, it appears that where an NRB gift, properly construed, includes the testator’s NRB as enhanced by any TNRB, the PRs should claim the TNRB. They should not seek to form a moral view as to whether the NRB beneficiaries have a greater claim on the estate than the residuary beneficiaries (the value of whose interests will be reduced by the enhanced NRB).

In such cases, even if IHT is not a feature of the estate, the PRs should claim the TNRB to evidence the criteria upon which the value of the NRB legacy has been ascertained and the estate distributed. 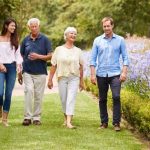 The Farmhouse enigma and care provided by family membersTax
This website uses cookies for functionality and to help us to improve the experience of the website. By continuing to use this website, you accept their use or you can also change your personal settings.