Attestation – validity of a Will

A person can validly attest a Will by writing his name in block capitals. So held the Court of Appeal in Payne v Payne [2018] EWCA Civ 985 in a judgment which dramatically illustrates the importance of the Court seeing original testamentary documents and hearing the evidence of attesting witnesses in probate claims. 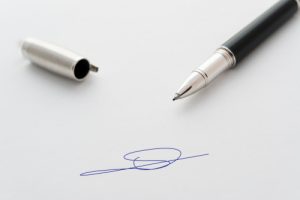 The deceased Mr Payne had four children by his first marriage in 1959. He remarried in 1997 but had no further children. He made Wills in 1998 and 2012 which were drawn up on templates but without professional assistance.

The 1998 Will appears to have made specific gifts of most of the testator’s valuable assets to his second wife (Mrs Payne) although there was no exhaustive gift of residue. It was duly signed by the testator and below the printed attestation clause there appeared the names, addresses and occupations of the two witnesses written in block capitals, each written in a different hand. There was no space identified for signatures and, as a result, neither witness had “signed” the Will in the commonly understood sense of that word.

The later 2012 Will revoked the 1998 Will and left the testator’s residuary estate to his son from his previous marriage, John.

In breach of CPR r. 57.5(1), the original of the 1998 Will was never lodged with the Court but remained throughout the proceedings at Winchester probate registry. Instead, the Court was referred to incomplete copies of the 1998 Will.

HHJ Faber, who presided at the trial, heard evidence from the attesting witnesses of the 2012 Will and found them to be unreliable. On that basis she dismissed the claim.

The judge also dismissed Mrs Payne’s counterclaim, having recorded that Mrs Payne was an unreliable witness and that there was no evidence to show that the 1998 Will had actually been signed by the named witnesses, that the capital-letter names were in their hand or that (even they were in their hand) the witnesses had, by writing their names in capitals, intended to attest the 1998 Will.

The judge therefore held that the deceased had died intestate.

The dismissal of the claim was not appealed but Mrs Payne sought and was granted permission to appeal against the dismissal of her counterclaim. So the issues relating to the validity of the 1998 Will (but not the 2012 Will) were in play on appeal.

Mr Gordon’s evidence (and the affidavit of the other attesting witness) confirmed that both men had written their own names in block capital letters for the purpose of attesting the Will.

On the strength of that evidence, the Court of Appeal (Henderson and Flaux LJJ) reversed the judge’s decision and pronounced for the validity of the 1998 Will.

Giving the lead judgment, Henderson LJ recited s. 9(d), Wills Act 1837, which provides that no Will is validly attested unless “each witness either – (i) attests and signs the Will; or (ii) acknowledges his signature, in the presence of the testator (but not necessarily in the presence of any other witness), but no form of attestation shall be necessary.”

Henderson LJ also referred to the earlier version of the sub-section in force before 1 January 1983, which required witnesses to “attest and subscribe the Will in the presence of the testator”. He held that the word “sign” in the amended sub-section meant the same as the archaic “subscribe” in the unamended version and that there was no requirement for a signature “in the sense of an identifiable and probably unique personal mark” as long as the witnesses write their names intending them to operate as an attestation.

On this basis, he held that the 1998 Will had been duly attested and was valid.

In the second part of his judgment, Henderson LJ went on to emphasise the “strong public interest in valid testamentary dispositions being upheld.” He approved the dicta of Cairns J in Re Muirhead (deceased) [1971] P 263 that “it is the duty of a Court of Probate to give effect, if it can, to the wishes of the testator as expressed in testamentary documents” and observed that this principle is reflected in the special procedural rules of CPR Part 57 and, in particular, the requirement to lodge original testamentary documents.

Henderson LJ described Mrs Payne’s failure to lodge the original 1998 Will as a serious procedural error. He was generally critical of the management of the case which had allowed this error to go uncorrected for so long. When, following the appeal hearing, the original 1998 Will was eventually lodged and inspected, it revealed that – among other things – each of the witnesses’ block-capital details were written in different coloured ink, supporting the inference that they had each written in their own details when they had attended to witness the Will.

Henderson LJ also remarked on “the special importance of hearing evidence… from an attesting witness [being] reflected in the long-established rule that such a witness is treated as a witness of the court, whose duty it is to give to any party who asks for it an account of the circumstances in which the Will was executed.”

The judgment is interesting because the trend in civil litigation is to allow parties to compromise substantive issues and to agree case management matters provided that the Court is not inconvenienced by the parties’ agreement.

Henderson LJ’s judgment is a fresh restatement of the special considerations which apply to probate claims once the Court is seized of them. The Court has an active and (it is sometimes said) inquisitorial role in the process. The validity of a person’s Will, and the integrity of the forensic process by which it is proved, are not simply matters for the parties to agree between themselves.

Contact us to discuss your training needs.  Gill Steel is an experienced practitioner offering off-the-shelf and bespoke training
for organisations offering a Private Client service.

Bookings now being taken for 2019

Rectification and transfer of property under a WillProbate, Wills

Validity of a Will – Nutt v Nutt [2018] EWHC 851Wills
This website uses cookies for functionality and to help us to improve the experience of the website. By continuing to use this website, you accept their use or you can also change your personal settings.