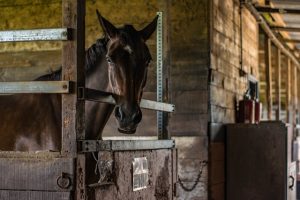 With so much being written and considered about the Vigne first tier tax tribunal decision (The Estate of Vigne Deceased v HMRC [2017] UK FTT 632) the impact of this decision on all livery and land possibly qualifying as a ‘brownfield site’ has to be given serious review. Any agricultural land and buildings that moved from farms to diversified “previously developed” land can qualify as a “brownfield site”

The position on the potential development for houses on such land is one of much debate, but recent decisions have been comforting.

A planning inspector allowed an outline proposal for 14 houses and showed that a Buckinghamshire Council had reached different decisions on two similar schemes on “previously developed” land in the same village. Judging that this inconsistency had caused the appellant unnecessary appeal expenses he awarded the appellant costs.

The site that achieved planning permission comprised horse grazing land, stables, hard standing and a ménage located outside the village settlement boundary. Referring to the NPPF (The National Planning Policy Framework) definition of previously developed land as land which is or was occupied by a permanent structure, including the curtilage of the developed land, the inspector concluded the whole site should be considered “previously developed land”. As such, the NPPF encouraged development and the inspector attached significant weight to this in his decision.

With ‘horse grazing’ land and stables being potentially classified as “previously developed land” much thought must be given to the inheritance tax concerns by tax advisers. The decisions in both Vigne and Wheatley (Wheatley’s Executors v CIR (SpC 149) [1998]) provide tax direction on horse activity. The ‘hope value’ of all such operations will be particularly vulnerable in tax terms. A move to ‘horse culture’ by an elderly farmer without much tax research a real worry becomes the potential loss of business property relief (BPR) on hope value. All tax advisers must ensure that all their livery clients are well prepared for the potential loss of agricultural property relief (APR) and BPR.

The full detail of HMRC’s appeal against the FTT Vigne decision UT/2017/0169 lodged on 24 November 2017 will be very interesting when the date and more understanding is known of the Upper Tier Tribunal’s decision.

The impact of the Vigne UT appeal could be key for all rural tax advisers. The direction of all the recent tribunals questioning services provided under s.105(3) IHTA 1984 has been negative, i.e. is the landowner “holding investments”? Examples are HMRC v Pawson [2013] UKUT 050 (TCC), Executors of the Estate of M Ross (Dec’d) v HMRC [2017] UKFTT 507 and The Trustees of David Zetland Settlement (TC2690).

Most farms have had to diversify to survive profitably. For the diversified farming operation the push by HMRC to define the diversified business as “holding investments” for Inheritance Tax (IHT) is important. The HMRC approach as to the level of services has been of huge interest as will the outcome in the forthcoming decision. The Upper Tribunal in Vigne case will hopefully provide direction for all property based diversified activities.

The “services provided” that do create a “Property” business eligible for BPR as shown in Vigne can apply for all diversified businesses. Examples of such farm diversifications are caravan storage where the landowner doesn’t just store the caravan but cleans and services the vehicles that are stored. Such degree of service can be argued to not make the activity “holding investments”. Further examples of diversified activities are holiday accommodation that provides meals such as breakfast. It is hoped that the Vigne Upper Tribunal decision will give guidance on the difference between “investment” and “non-investment” diversified farm activity.

Many farmers were encouraged into a variety of businesses through grants, propaganda and diversification but were unaware of the IHT negatives. HMRC must give greater guidance to rural businesses and their advisers as to what diversified activities qualify for BPR. Especially if underneath the property based business is potential development land. It is hoped that the Vigne decision will lead the way in this regard.

This webinar will remind practitioners of matters their private clients might usefully review before the end of the tax year.

Could HMRC successfully tax income when its source could not be identified?Tax
This website uses cookies for functionality and to help us to improve the experience of the website. By continuing to use this website, you accept their use or you can also change your personal settings.