Book review of A Practitioner’s Guide to Wills

The latest edition of this comprehensive guide to Will drafting was published in January 2017. As King, Biggs and Gausden state in their preface, the book “is intended to provide a wide-ranging guide to the drafting of wills.” This is evidenced by the breadth of its contents, dealing with everything from formal legal requirements to precedents to tax planning. Its aim is to provide a reference book for practitioners that will enable them to draft and interpret Wills and give effect to their provisions.

The preceding edition had been published in 2010, and this update deals with some significant developments both in statute and case law. These changes include taxation matters affecting Wills, notably among them the very new residence nil rate band (RNRB) which only came into effect in April this year.

There are 30 chapters in the book covering multifarious topics of relevance to the Will practitioner. The first few chapters deal with the general requirements that apply to all Wills: taking instructions, the nature of a Will, testamentary capacity, formal requirements, revocation and alteration, codicils. The various types of beneficiary are discussed, as are executors and trustees. Many precedent clauses are included at each step of the way, a practice which continues throughout the book.

The following chapters consider particular kinds of property a testator might own and the legacies he or she might want to make, covering foreign property issues, specific legacies, businesses, land, and gifts of residue. Once having addressed the issue of residue, the book turns to trusts —pilot and discretionary— and to executors’ and trustees’ powers. Several chapters deal with a range of both general administrative and specifically trust-related topics, from the likes of abatement and ademption through various administrative powers to perpetuities and accumulation.

The next section of the book addresses the construction of Wills, leading to consideration of what happens if a gift fails. This, in turn, takes the practitioner on to matters of intestacy and family provision. The latter is dealt with by the provisions of the Inheritance (Provision for Family and Dependants) Act 1975, and this edition of the book includes discussion of the significant changes made to that Act by the Inheritance and Trustees’ Powers Act 2014.

The final few chapters outline inheritance tax, capital gains tax, the taxation of settlements and tax-efficient Will planning. Any one of these subjects could, of course, warrant its own book. In this guide, however, the fundamental tenets in each area are discussed, and a practitioner would hopefully be alerted to matters on which they might want to seek more detail.

Where necessary, chapters have been edited to include recent statute and case law. The chapter on construction of Wills, for example, has been significantly re-written following the Supreme Court’s decision in Marley v Rawlings, in which Lord Neuberger set out the common law principles relating to contracts and unilateral documents as laid out over the past 40 years. The preface helpfully identifies legislative changes (for example, the EU Succession Regulation (EU Reg. 650/2012) the Marriage (Same Sex Couples) Act 2013) that have been covered in this edition of the book, as well as concepts which have been introduced (e.g. RNRB) or significantly changed (e.g. use of pilot trusts) as a result of that legislation.

As each topic is discussed, the practitioner is taken first through the legal position, covering pertinent legislation and case law, and then provided with any relevant precedent clauses together with accompanying explanations. The balance of this content varies according to the subject under discussion. The chapter on testamentary capacity, for example, includes one or two mentions of statute, only one precedent clause, but significant amounts of case law exploring and explaining various issues relating to capacity. The chapter on executors and trustees, by contrast, contains relatively little legal analysis, but includes numerous precedents to cover the many variables of such appointments.

While the tables of cases, statutes and statutory instruments are all listed alphabetically, as one would expect, the table of precedents is usefully structured by reference to each chapter, making it easy to identify the precedents available for any given situation. Two appendices contain more substantial precedents: model Wills, nil rate band discretionary trusts and other miscellaneous precedents such as a letter of wishes and deeds of variation.

The book is accompanied by a CD ROM which contains all the precedent material from the book. This allows for the precedents to be adapted easily to each practitioner’s or firm’s needs.

The book is accessible, and presents itself as a wide-ranging guide and point of reference for practitioners dealing with Wills. Topics on which one may seek guidance are covered in clearly delineated chapters, each chapter containing user-friendly sub-headings. It is a straight forward matter to home in on pertinent information very quickly on opening the book. It is also reassuring for the reader to have relevant statue and case law explained, allowing the practitioner to better understand the intricacies and nuances of a topic under consideration.

Practitioners will find this guide useful both for providing explanation and precedent relating to any given aspect of a Will, and for highlighting potential areas of difficulty that may need particular consideration. While some matters are not dealt with in huge detail—as identified in relation to tax planning issues—the book provides much information, and for many aspects of Will drafting the practitioner will need to look no further. The information given is also likely to help the practitioner identify if any further research or investigation on a given matter needs to be undertaken.

It is in the nature of legal writing that the law can change quickly, perhaps clearly evidenced by mention on the very first page of Ilot v Mitson, which was still subject to appeal to the Supreme Court at the time the book was written. This hearing has, of course, now taken place. Practitioners will be aware, however, that the law does not stand still, and the book does much to present the up-to-date information necessary for the drafting and construction of Wills. 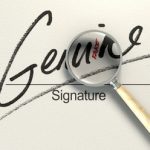 Disputed Will proved to be a forgeryWills

EU Succession Regulation 650/2012 – Brussels IV – post BrexitTax, Wills
This website uses cookies for functionality and to help us to improve the experience of the website. By continuing to use this website, you accept their use or you can also change your personal settings.