The importance of making Advance Decisions

The Court of Protection has ruled that it was not in Paul Briggs’ best interests to continue with life-sustaining treatment, taking into account both his ‘past’ and ‘present wishes’ in accordance with s4 (6) (a) Mental Capacity Act 2005.

In July 2015 Mr Briggs was involved in a head on collision and suffered severe brain damage and was diagnosed as being in a ‘minimally conscious state’, meaning that he had some degree of consciousness. This case is significant as Mr Briggs was not in a ‘permanent vegetative state’ which means that a person does not have an awareness of themselves or their environment. The term ‘minimally conscious’ is significant as Mr Briggs could, according to an independent expert, with rehabilitation have some positive experiences in the future, although he would still have profound disabilities.

Mr Briggs’ wife Lindsey contended that he would regard life-prolonging treatment in these circumstances as ‘torture’. Paul Briggs’ treating clinician believed that he should be given a chance to make a recovery. Mrs Briggs disagreed and despite an independent expert’s view that profoundly brain injured patients can become happy with their restricted lives, she argued that even the best possible outcome projected by the independent expert would for Mr Briggs, not be the quality of life he would consider worthwhile, according to his previously expressed wishes.

This case highlights the importance of making Advance Decisions (‘AD’) or Lasting Powers of Attorney for Health and Welfare (‘LPA’) which would have allowed Mr Briggs to set out in advance his wishes which would have been legally binding or assigned the decision making powers to his wife Lindsey as his Attorney. Unfortunately, Mr Briggs had not made either an AD or LPA.  In this situation the decision making power was with the medical team who usually consult with the patient’s family but are not legally bound by what they wish. If there is a dispute, as in this case, matters have usually to be decided by the Court.

After the Official Solicitor confirmed that he would not appeal the case, Mr Briggs was transferred to a hospice where he was given palliative care and sadly died in January 2017.

This webinar will build on practitioners’ knowledge of creating and administering the financial and health affairs of clients through examining current issues in dealing with lasting powers of attorney and deputyship matters.

Recordings available after the event 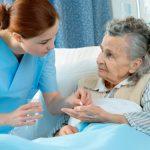 Care home fees and the unregulated marketElderly/Vulnerable Client, Gill's Blog
This website uses cookies for functionality and to help us to improve the experience of the website. By continuing to use this website, you accept their use or you can also change your personal settings.