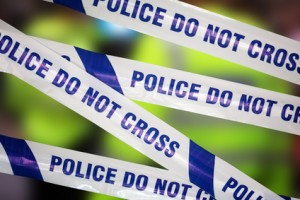 There was an unexpected extension to the proposed IHT relief available to members of the emergency services when the relevant section of the Finance Bill 2015 was published. The extension is in relation to the deaths of constables (effectively all serving police officers) and members of the armed forces who die as a result of being “deliberately targeted” by reason of their status as a police officer or member of the armed forces.

This additional proposal will cover the cases of “a police officer, peacefully patrolling, who has a brick dropped on his or her head simply because he or she is a police officer” and the two female police officers killed by bullets and shrapnel in Manchester in September 2012. Both these incidents would have been excluded by the initial proposals, as highlighted in “A great relief” published in Money Management September 2014 and here on LawSkills website in November of that year. This addition to the legislation will widen the scope of the relief and make it important for all professional advisers to be fully aware of the detail: for example many police officers will have been assaulted during their careers. However, even with this additional provision there are still three fundamental flaws in the legislation.

The changes are effective for deaths on or after 19th March 2014 i.e. they apply now, when the circumstances giving rise to the injury/disease may have occurred many years ago. The relief is in a similar format to the existing death on active service relief i.e. the same wide causal connection. Firstly it applies to someone responding to emergency circumstances in that person’s capacity as an emergency responder.

The definition of emergency responder is wide, as shown by the detail set out in box 1. An important point to note is that members of the general public could be covered if engaged in the relevant activity (“it is immaterial whether the employment or engagement is paid or unpaid”). 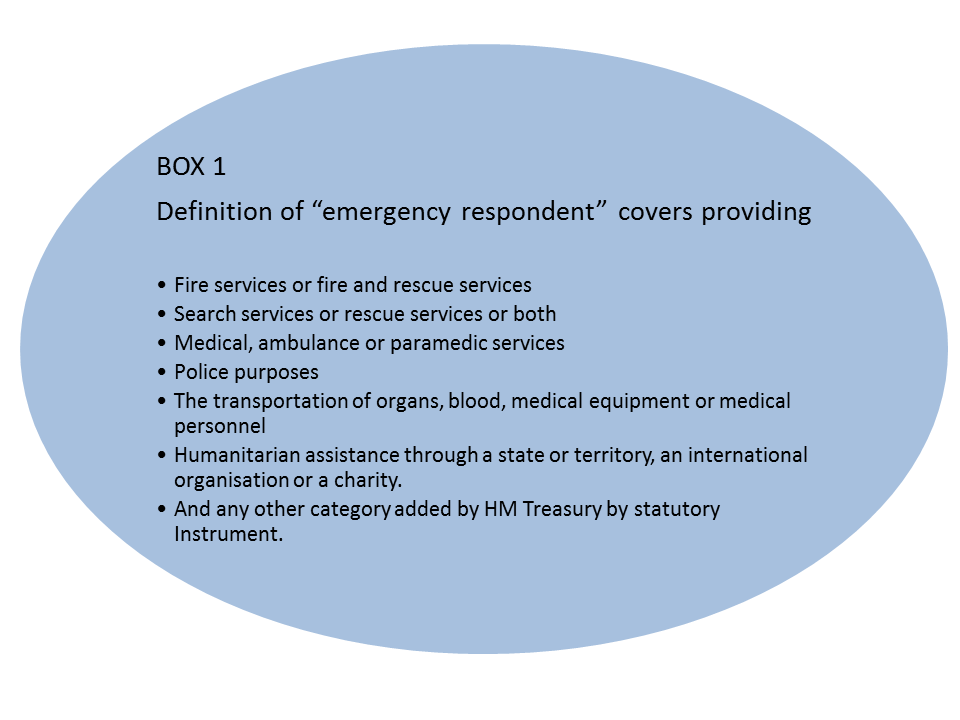 The wording of the section dealing with who is an emergency responder covers a person employed or engaged in fire services and, through a state government, international organisation or charity, humanitarian assistance. For the other activities the reference is to a person employed or engaged to provide those activities. Engaged to provide implies an official approval to do so, whereas engaged in suggests just undertaking the activity. So is it possible that a member of the public rescuing someone from a blazing building is covered, but tackling a terrorist on the tube is not (and in each case dying as a consequence)?

Another important addition is that the original relief for members of the armed forces on active service has been extended to cover responding to emergency circumstances in the course of the person’s duties as a member of any of those armed forces or as a civilian subject to service discipline. For example, developing a disease when ordered to respond to a UK flood or West Africa ebola emergency. The phrase in the course of the person’s duties would seem to exclude off duty intervention.

Finally there is the extension to the deaths of constables or service personnel targeted because of their status. Here the constable/service personnel has to be deliberately targeted by reason of his or her status as a constable or service person and it is immaterial whether on or off duty. There is no mention of who must do the targeting: could this be a provision that gives IHT relief to service personnel, not on active service, but ordered into dangerous situations eg the Christmas Island nuclear test exposure at the end of the 1950s?

There is a clear intention shown of trying to retain the relief for members of the armed forces who are on active service as opposed to being just in service. This leads on to the fallacy of trying to restrict the relief to the equivalent of active service for members of the emergency services. And finally none of the current difficulties with the original relief have been addressed.

The major point that the drafting does not address is that members of the emergency services, particularly police officers, are in many ways on full time active service: their theatre of war is in the UK. There are many tasks that are undertaken by members of the emergency services that can suddenly become very dangerous. Similarly for members of the armed services there are duties that can be dangerous and fatal when not on active service: for example David Hanson MP’s constituent, Nigel Thomas, the RAF officer who died as a result of radiation exposure in Cyprus or the three army reservists who died in the Brecon Beacons in July 2013 whilst on a SAS selection course.

In May 1996, Kenneth Noye stabbed to death Stephen Cameron following a road rage incident on the M25. In 1986 Noye was convicted of handling some of the stolen gold from the Brink’s-Mat robbery in 1983. In 1985 Noye stabbed to death at his Kent home a police officer, D C John Fordham, who was involved in a surveillance operation. Noye admitted causing the officer’s death but was acquitted by a jury on the grounds of self defence. By their very nature it is reasonable to assume that police surveillance operations will be undertaken by officers in plain clothes, so the death of such an officer is unlikely to be as a result of being “targeted because of their status.” It is also unlikely that surveillance itself is responding to emergency circumstances, unless the argument prevails that the sudden change to a dangerous situation immediately before death/injury is sufficient.

This new relief is potentially wide and complex. When considering a particular case it will always be necessary to review the legislation itself and not to rely upon any attempted summary of it. With this warning an adviser checklist is provided in Box 2. 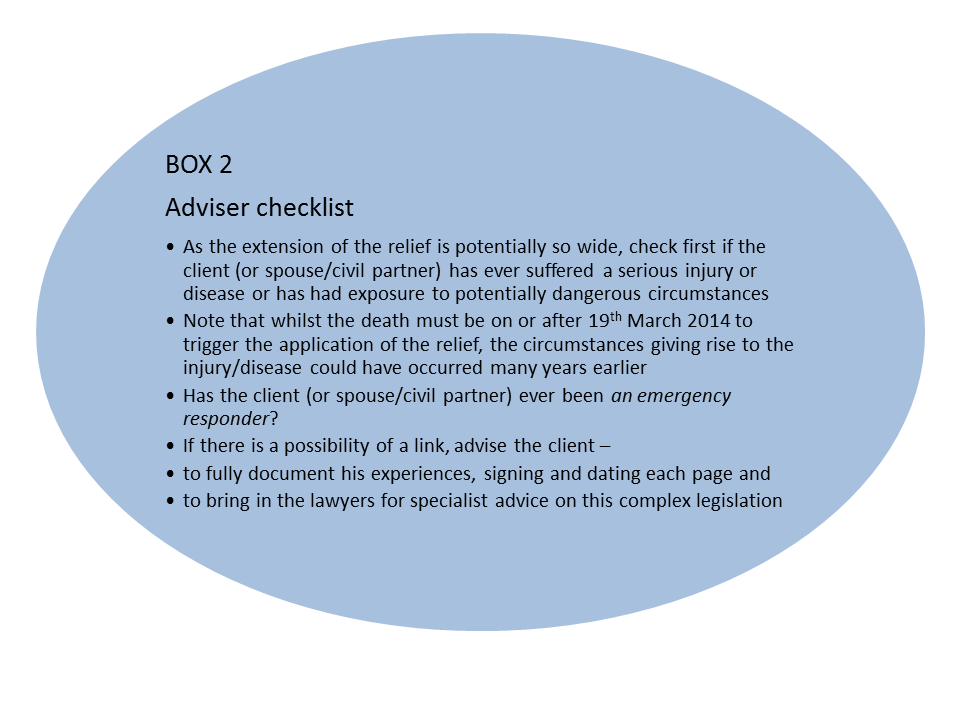 The complexity is caused by the attempt to restrict the relief as opposed to allowing it irrespective of the circumstances in which the death/injury/disease arose. There will be litigation of both hard cases and cases where the relief is overlooked, it is too late to claim a refund of the IHT paid and advisers face negligence claims.

It is improbable that these new provisions will be enacted as drafted. Our members of parliament are likely to raise particular cases as the Bill progresses towards enactment, with the prospect of more people becoming eligible for this generous relief.

Acknowledgement: With thanks to Money Management, an FT publication where this article was first published.

Peter Nellist
© Peter Nellist
Peter is a non practising solicitor and a former member of the Institute of Financial Planning. He undertook articles and was an associate with a well know City firm of solicitors. He was the head of a private client team of solicitors and has won some prestigious awards including the FT's Money Management's Financial Planner of the Year on two occasions. Peter continues to take an interest in private client legal and financial planning matters although is now retired from practice.
Recommended Posts
Categories 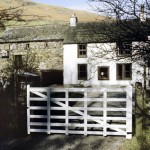 The practical application of ‘Agricultural Value’Tax 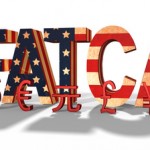 FATCA reporting – help is on handTax
This website uses cookies for functionality and to help us to improve the experience of the website. By continuing to use this website, you accept their use or you can also change your personal settings.